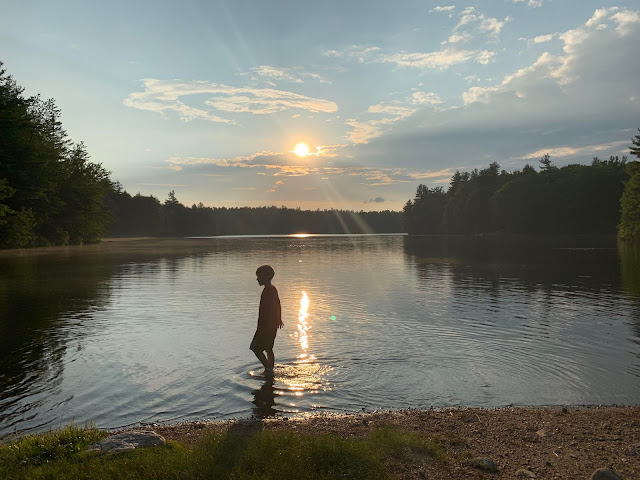 We’d been sweaty and pissy to each other all day, so it was time for a swim. We arrived at a nearby lake, my kids bickered about which frog net they would carry, and grumbled about which snacks I did or did not bring, they even argued about whose bag was heavier. But I ignored them and walked ahead. Somehow, they survived and arrived at the water’s edge with me, not dead on the trail from the terrible disease ‘heavy bag-itus’, as was threatened.

I stood in the water, texting a friend, answering her thoughtful query about how my day was going. At the moment, little else felt as important to me as having a simple catch up with my friend.

Not too long ago, I would have felt self-conscious if I was blatantly ignoring my children in public in favor of my phone. Even though I am a rock-solid awesome mom, the public performance of motherhood often prevented me from doing things that nourished me.

Women must not only be sexually appealing and visually pleasing at all times, but they must also be ever-vigilant, patient, and hyper-responsive mothers. Even if you let your shit fall apart in private, many of us subconsciously try to observe oppressions of the mothering-in-public code of conduct.

But now, most parents are stretched so thin we are translucent and bloody raw.

It’s July 2020, and I’ve started to cease noticing who might assess my mothering, and have thus begun to unravel my loyalty to ‘the code’. You might think it was difficult to unlearn something that I had been religiously practicing for 23 years ( yes, I have been a mother for that long). But, exhaustion has a way of expediting transitions; when you’re too tired to overanalyze, sometimes things can just, well, shift.

To be clear, my kids were completely fine.

Swimming in calm, waist-high water, with flotation devices and even bellies full of organic peanut butter and organic jelly and sprouted multigrain bread. They were really truly fiiiineeeeee. But still, I had to actively shrug off the guilt that I wasn’t playfully splashing with them or delivering an engaging mini-TED talk on ‘amphibians of the lake’.

We were on hour #8,900,993,783 together that week, but they still want me to watch every somersault, check out every nice stick they find while hiking, applaud every video game win.

“I’m so unbelievably tired of you guys. I couldn’t give a fuck about that Minecraft tower or whatever.”

Because this time sucks, and although I’m positively flattened, my lonely kids deserve all the patience and encouragement that I can muster, even when it’s like vapors being extracted from my pores.

You read that right, I’m exuding only vapors of patience because the real stuff ran out a while ago.

But there’s a big difference between mothering my kids well, and putting on a performance for others.

Solely for the benefit of my kid, I notice that it is actually a fine stick, very strong indeed, and comment on it thusly.

“Wow, is that from an oak tree? Great find, honey!”

My son beams and goes back to somersaulting.

I’m not sure that I would have found the sweetness to provide that response if I’d been preoccupied with looking like a good mom instead of actually being one.

Make no mistake, women know that our bodies, outfits, jewelry, make up (or lack thereof), and parenting are being assessed and critiqued constantly. Part of the code is allow this truth to permeate our very cells, yet never speak of it.

We are almost constantly performing, sucking in that gut, and smiling, but rarely naming these absurd rules that guide so much of our lives. Maybe those rules have such strong and silent hold within us because we’ve been trained so well to obey them? The more we submit, the more products we buy, and the harder we work to earn money to buy those products. We don’t have to guess who profits from all that.

I’m standing in the water, my gaze alternating between the tiny screen in my hand, my giggling kids a few yards away, and the enchanting dappled water all around me. Shades of brown, green, grey, blue, depending on the light and shadow, rocks, sand, and leaves. Little fish flit by, my footfalls sending up slow-motion plumes of cloudy silt, providing safe cover for them as they dart past me. The shifting visuals are dazzling.

I widen my eyes, trying to really take in the beauty around me, really let it pour into my eyeballs, while thinking,

I wonder how many other mothers have been conducting similar self-soothing rituals on the daily since March, or even before the pandemic. Part mindfulness, part internal silent primal scream, part keep-your-shit-together-and-make-yet-another-box-of-mac-and-cheese-for-the-kids.

I wonder how many parents have repeated similar refrains to the point where it’s just become the background noise of the mind? The mental static that is a barely perceptible droning panicked attempt at calming.

The water around me looks like an oil painting, maybe a Monet? The swatches of colors are shifting all around me, a gentle lapping kaleidoscope caressing my calves. I’m jogged out of my own enjoyment of the moment, and accidently shift to observing the moment from afar, and picture an imaginary artist painting my scene. I see him sitting back on a three legged stool, squinting into the dim lamplight as he tries to imagine New England lake water in July. I think of this fictional painter mixing pinks and whites to capture the dimpled cellulite that mottles my thighs, he’s making them extra big, for a dramatic effect.

So many of us have a critical old white guy taking up precious space in our minds, observing, assessing, and critiquing at all times.

I see 3 little warbling dots appear on my phone screen. My friend texts,

“What stage of grief are you in today?  I think I’m denial.”

“I think I’m all the stages at once today, like in a paralyzed but frantic way. I’m desperately trying to stare at the lake and actually feel something, but I’m dead inside.”

“Maybe the key is stop giving as much of a shit. Like kinda almost give up, but only on the vapid stuff. Our old lives are dead, but maybe it’s not all bad?”

It suddenly occurred to me that this time can allow me to give less of a shit so that I can care more.

It used to be that every piece of clothing I wore underwent intensive scrutiny on fit and style before I would wear it in public. I used to spend time lambasting myself for the immense width of my buttercream thighs as they spread across the seat of my chair.

Staring down at the vastness of my thighs, I used think to myself; “Disgusting. Hideous. Unlovable.”

I spent so much time with these pointless exercises in circular self-loathing that I forgot to have fun. I forgot to even enjoy that ice cream cone as I ate it. I forgot to realize that I’m definitely going to die and how tragic it would be if I just lived a shriveled no-fun bummerass life without French fries in the name of placating that nameless critical guy on the beach. I distracted myself with such vapidity so as to prevent myself from withering under feelings of powerlessness, rage, and the far more complex aspects of being a white woman in America. I allowed my attention to be pulled from the more important things because they were damn hard to even think about, let alone act on.

But seriously, many of us have been duped into ignoring our roles in fighting for equality in order to chase the elusive impossible perfect body or elicit the fleeting approval from strangers. None of that shit matters anymore, or rather, it never did.

Before the virus, I was distracted by the glittering waters of the patriarchal hyper-capitalist machine that is expertly designed drown us. These distractions strip us of our time, energy, attention, self-confidence, and money.

When we’re so busy entertaining the corrosively critical voices that have been expertly installed by relentless marketing strategies meant to keep up submissive and siloed, then we don’t pose much of a threat. Our collective powers are watered down when we allow ourselves to submit to the internalized white male criticisms that seep into every aspect of our lives.

What if we all decided to snap out of it and evict those old white fucks from our minds?

What if we give less of a shit about fitting into a narrow definition of womanhood and use that energy to pour ourselves into what truly, deeply, actually matters?

Another text comes through from my friend;

“I don’t think I became an effective feminist until I cut off all my hair. Same thing right? Not posturing anymore. The old me died.”

I wonder if my true feminism was born when I stopped counting calories.

I’ve been working multiple jobs since I was 14, dressing for work, posing for others, framing myself for consumption of some kind. Suddenly, the virus has allowed me to step off stage. Without these daily charades, I’ve been allowed the opportunity to learn to ignore the crushing constant chatter of such oppressive forces.

The imagined old white guy painter residing in my mind begins to fade, and along with him, my debilitating self-critiques. Once I stop contorting and posing for the observers and critics (both imagined and very real), I can become a better mother, activist, ally, human, ancestor.

White women; we have tremendous power to do good and stand for what’s right, if we actively work to unravel the insidious codes and poisonous rules that we’ve subconsciously allowed to keep us supposedly well-behaved, respectable, quietly docile, complicit. Let’s use our collective strength help usher in a desperately overdue era of social and racial justice, healing, and actual inclusion and equality.

Freeing up the space in our minds that were once occupied with outfit choices or diets can make room for us to stop being accomplices to racism, allow us the energy and bandwidth to save our democracy, our souls, our humanity.

The rippled waters around me suddenly calm, allowing me to finally see my surroundings clearly, I can finally see our priorities in sharp relief, and now, there’s no going back.

This article was published on Medium. 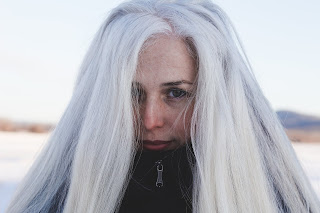 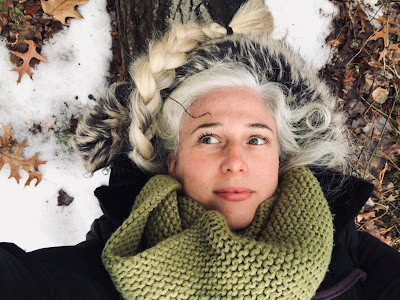